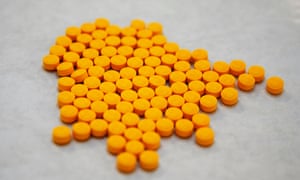 Deaths caused by the drug fentanyl are rising and there is an ongoing risk of it being added to heroin sold illegally in the UK, an independent advisory board to the government has warned.

The Advisory Council on the Misuse of Drugs (ACMD) published a report on Friday calling for the government to consider tighter controls. At least 135 registered deaths in the UK were related to fentanyl in 2017, up from eight in 2008.

Fentanyl is a powerful opioid drug used in the treatment of severe pain. It has been found mixed with street heroin, causing accidental overdose in users. The drug is typically up to 50 times stronger than heroin.

One type of fentanyl, carfentanyl, is 5,000 times stronger than heroin and is used as an elephant tranquilliser.

Dr Owen Bowden-Jones, the chair of the ACMD, said: “We have seen a recent increase in fentanyl-related deaths in the UK largely driven by this potent drug being added to heroin.”

He added that fentanyl and other new opioids can “cause life-threatening harms” including rapid overdose and that their “emergence on to UK drug markets is of great concern”. He said vigilance must be maintained to protect the public.

Bowden-Jones said lessons must be learned from countries such as the US – where thousands of deaths annually are linked to the drug – about how to put forward solutions.

“Improved monitoring of these drugs across the UK will also assist in building a more accurate understanding of the problem and potential solutions. Fentanyl and its analogues represent a significant new challenge and action is now needed,” Bowden-Jones said.

In April 2017, after a spate of deaths linked to fentanyl in northern England, Public Health England warned heroin users to be extra careful when using the drug. It said to test a small amount first and not to take it alone.

The then home secretary, Amber Rudd, commissioned the ACMD to write a report on fentanyl’s risks, prompted by concerns over increased rates of drug-related deaths and growing evidence from law enforcement agencies of fentanyl entering European drug markets.

The report called for a full government review and for additional controls to be introduced in the UK.

It noted: “The risk to public health from fentanyls may be lower in the UK than in North America because there is a smaller population of people who have become habituated to strong opioids. There is, however, limited information available about diversion rates and misuse of pharmaceutical fentanyls in the UK.”

It continued: “Episodes of fentanyl toxicity and deaths in the UK … have not approached the very high numbers seen in North America. However, rates of registered deaths involving fentanyls have recently increased and may be underestimated because sufficiently detailed forensic analysis of drug causes is sometimes not carried out.”

It also said agencies with responsibilities relating to drug misuse should monitor the international situation and share available UK data. Additionally, it noted that the government should commission research at a local and national level into the prevalence of fentanyl and fentanyl analogues in drug seizures and when people are taken to hospital after taking heroin.

A Home Office spokesperson said: “We are grateful to the ACMD for this report, which we will consider carefully.

“We have already commissioned a major independent review of drugs, looking at a wide range of issues, including enforcement, to inform our thinking about what more can be done to tackle harm from drugs.

“We are also moving at pace to recruit 20,000 extra police officers to fight all forms of crime and have launched a review of serious and organised crime to consider the powers, capabilities, governance and funding required to bolster our response to today’s threats, including drugs.”

… will these define the 2020s? This has been a turbulent decade across the world – protest, austerity, mass migration. The Guardian has been in every corner of the globe, reporting with tenacity, rigour and authority on the most critical events of our lifetimes. At a time when factual information is both scarcer and more essential than ever, we believe that each of us deserves access to accurate reporting with integrity at its heart.

We have upheld our editorial independence in the face of the disintegration of traditional media – with social platforms giving rise to misinformation, the seemingly unstoppable rise of big tech and independent voices being squashed by commercial ownership. The Guardian’s independence means we have the freedom to set our own agenda and voice our own opinions. Our journalism is free from commercial and political bias – never influenced by billionaire owners or shareholders. This makes us different. It means we can challenge the powerful without fear and give a voice to those less heard.

None of this would have been possible without our readers’ generosity – your financial support has meant we can keep investigating, disentangling and interrogating. It has protected our independence, which has never been so critical. We are so grateful.

More people than ever before are reading and supporting our journalism, in more than 180 countries around the world. And this is only possible because we made a different choice: to keep our reporting open for all, regardless of where they live or what they can afford to pay.

As we end 2019 and enter a new decade, we hope you will consider offering us your support. We need this so we can keep delivering quality journalism that’s open and independent. And that is here for the long term. Every reader contribution, however big or small, is so valuable.